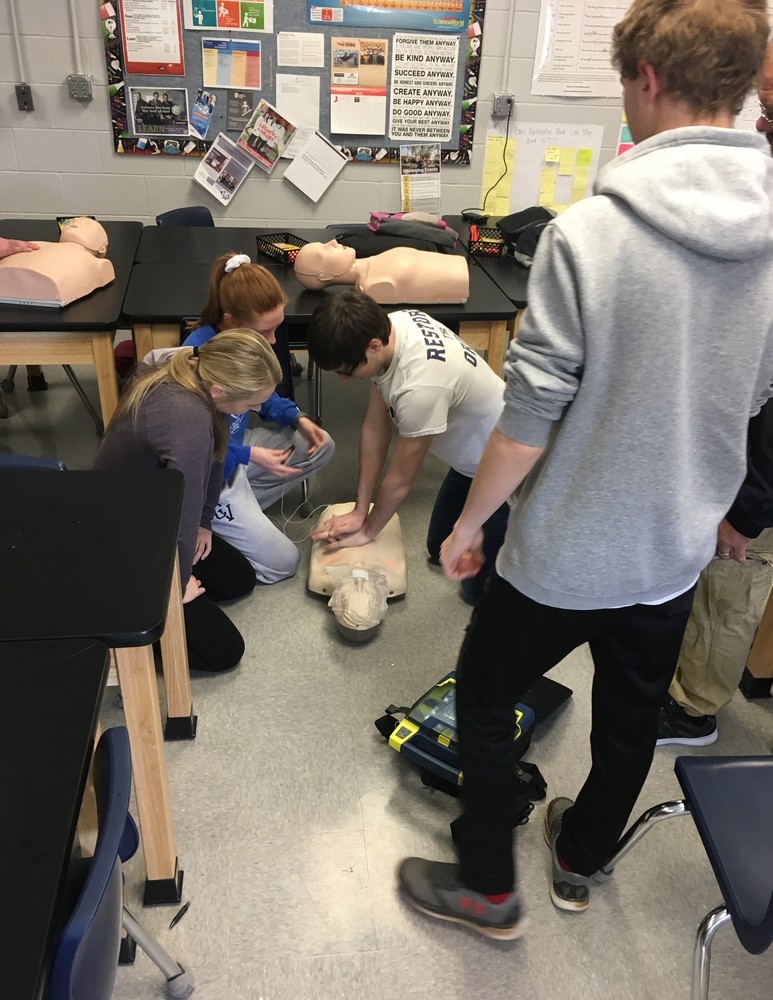 When the opportunity came to help her students learn how to save a life, Science teacher Andrea Wolf took it. “I was teaching a short course on CPR (cardiopulmonary resuscitation) in my Health Science class, and I asked my students if they would like to learn the procedure.” She said without missing a beat, they all said yes.

Once plans were approved to have Emergency Medical Technician and certified CPR instructor Pastor Shawn Kitzing visit the high school, Wolf’s eight students, who ranged from 9th to 12th grade, were prepared and excited to learn the lifesaving technique.

“The first thing (Kitzing) emphasized was how important it is to start CPR immediately if anyone ever stops breathing,” said junior Kenzie Wadas who plans a career as a paramedic. “He told us when the heart stops pumping blood to the brain and other organs, a person can suffer brain damage or even die after only a few minutes.”

“The brain can become completely deprived of blood—and, therefore, oxygen—three minutes after a cardiac arrest occurs,” Wolf explained. “The longer it’s deprived of oxygen, the greater the damage can be. Starting hands-only CPR and using compressions will help circulate blood through the body, especially to the brain.”

Wolf said after a brief question and answer period in which Kitzing explained the importance of making sure the victim’s airway was clear, calling 911, and getting a defibrillator if one was available, he introduced the students to specially equipped adult- and child-sized mannequins for them to practice on. “He showed them where to place the heels of their hands on the mannequin’s chest and how to do compressions,” she said.

“Our instructor said to keep our arms straight and to do rapid pushes, between 100 and 120 compressions a minute,” said junior Cameron Kelly. “He told us to think of the old BeeGees’ song, ‘Staying Alive’ if we weren’t sure how fast the compressions should be.”

Wolf said the mannequins were equipped with a sensor that blinked green so long as the students’ compressions had the right amount of depth and force. She said her kids “weren’t at all intimidated” when Kitzing told them the compressions had to be deep—at least two inches—and they were to likely break cartilage if they did it right. “They all said if a situation ever arose where someone needed CPR, the adrenaline would kick in and they would just do it, without thinking about anything other than keeping someone alive,” Wolf said.

“Our instructor told us that doing compressions was really physical because we had to use our upper body weight,” said freshman Thomas Bonge. “He said if we ever had to do them alone for a long time, we needed to go on until help arrived or until we couldn’t go any longer.”

When they finished doing compressions, Kitzing brought out a portable defibrillator (AED) and had them take turns placing its special electrode pads on a mannequin. Wolf said he explained the device could check a heart rhythm and “shock” it into beating or restore it to its normal rhythm. “He told them an AED could increase the chance of a victim’s survival by 13% and how important it was to know the locations of the defibrillators in the school building.”

Wolf said her students did a “phenomenal” job of following instructions, especially since they were given the scenario that their mannequin-victim had fallen unconscious and they were to assess the situation. “They worked together as a team and took turns doing compressions and following the steps of the AED to save their victim!”

The students said they were glad they had the opportunity to take Kitzing’s class. “We learned that performing CPR on someone who has stopped breathing can double their chance of surviving,” said freshman Neleigh Poss. “That alone told me how important learning CPR is.”

Senior Zach Lauria, whose father is a paramedic and mother a flight nurse, said although he was familiar with how CPR was done, this was the first time he had trained on a mannequin.  “I found the experience really rewarding. I think everyone should learn CPR because it increases the chances of more people being saved,” he said.

Sophomore Dakota LaCost agreed. “I didn’t know anything about CPR until we took this class. Now I feel more informed.” Cameron Kelly said one reason he wanted to learn CPR was because his grandmother suffered a heart attack several years ago. Although she didn’t need resuscitating, Kelly said she did end up having a triple bypass. “If a situation like that ever happened again, I wanted to know that I could handle it; that I could help.”

School nurse Michelle Wood said more than 400,000 people die from a cardiac event each year. “In a lot of cases, it takes paramedics longer than seven or eight minutes to get to the victim, and those minutes are critical to a victim’s survival.” She said by learning how to perform CPR, almost anyone can give someone a chance at surviving once their heart has stopped. In fact, she said at the elementary school, students in grades 4 through 6 have learned how to do the hands-only method which excludes any mouth-to-mouth contact. “We hope by making our students familiar with CPR, it will give them the confidence they need if someone becomes unresponsive and stops breathing. This is definitely a case where knowledge is power.” Wood applauded Wolf’s students and said the school wants to implement ongoing education in CPR training to not only its students, but all its faculty and staff, “since it is such a unique and useful gift to be able to save lives.”

Wolf called the knowledge her students gained from learning CPR literally life-giving. “Hopefully, they’ll never need to use it, but if a time comes when they do, I’m confident these students will be prepared.”