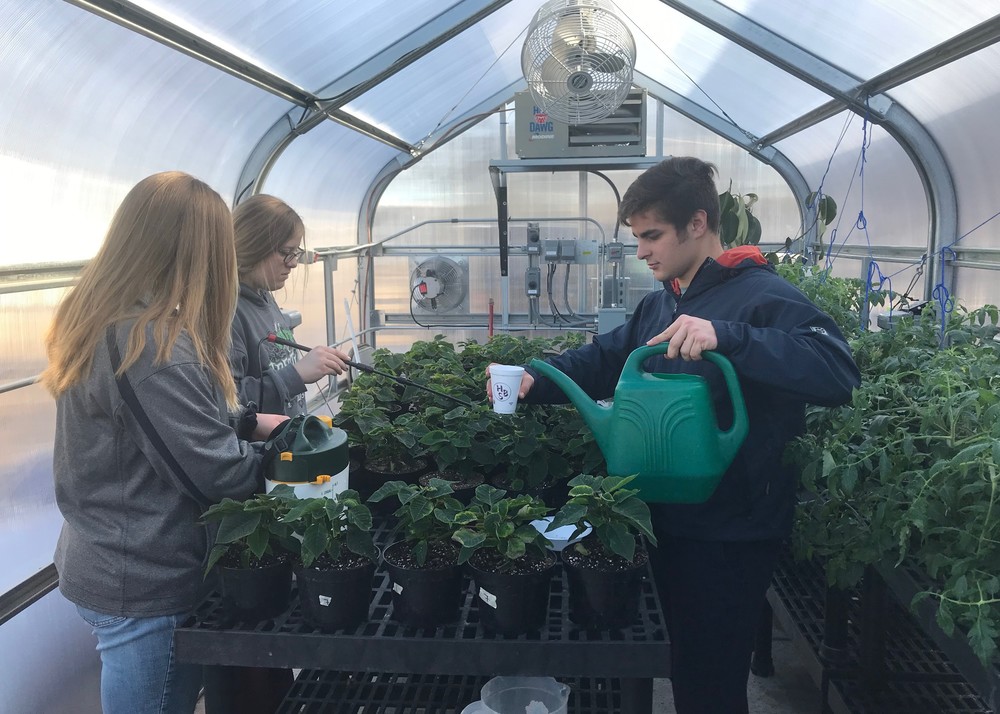 The Ag teachers at Central Valley are doing more these days than growing young minds; with the help of a Perkins Grant that allowed them to purchase a small greenhouse, they’re growing ideas and entrepreneurialism and… poinsettias… sort of.

Leslie Dugan and fellow Ag teacher, Julia Wright (the two are daughter and mother), were delighted when they were awarded a Career and Technical Education Grant a couple of years ago which helped them purchase a greenhouse. “We both had greenhouses at our high schools, and we knew they were a valuable learning tool,” Dugan explained. Since their Ag class covers quite a bit of plant science, Dugan said a greenhouse seemed the perfect way to literally bring that class to life.

The 9’x18’ structure, which sits in the northeast parking lot of the school, has a polycarbonate twin wall covering and is tornado, snow and weight proof. Said Wright, “It has all the bells and whistles.” Dugan said it’s designed to hold the sun’s heat and, if it gets too hot, there are automatic fans and shutters which help cool it down. Likewise, she said, there’s an automatic heater with coils that kick on and regulate the temperature when students are coming in to check plants during the cold months.

Both teachers said the greenhouse plays an integral part in their students’ studies. For example, in her fourth period Nursery and Landscaping class, Dugan said students keep a calendar of their various responsibilities. “One student is in charge of watering the plants, one is in charge of cleaning, and one is the general manager who makes sure everyone else does their job.” She said part of a student’s grade is based on how well they perform their duties.

The greenhouse is also used for experiments, Wright said. For instance, students may change the amount of fertilizer used on a plant to see how it best affects its growth, or they might try different cuttings from a plant to determine how many new plants those cuttings can successfully grow. “This year,” Dugan said, “we’re trying to grow poinsettias,” a plant she called, “very temperamental.”

Special Ed teacher, Staci Rother, said her students enjoy working in the greenhouse as well. Three days a week they go to the handicap-accessible structure where they “pinch Monday, water Wednesday, and fertilize Friday.” Rother said the responsibilities sit well with her students and “help better prepare them for when they go out into the world.”

Dugan said the greenhouse works lockstep with several hydroponic garden towers the school purchased a few years back. The plants sit in small soilless baskets and use water and nutrients that are funneled up the tower to grow. “They do really well as long as we keep adding water and maintaining the correct pH balance,” Dugan said. In some cases, Wright added, the plants get too big and it works best to move them to the greenhouse. She said between the garden towers (which use 10 percent of the water that traditional soil gardening uses) and the greenhouse, students have been able to grow a variety of leafy greens which are served in the school lunchroom. “We’re working on being able to eventually add beefsteak tomatoes as well,” Wright said.

Dugan said the students enjoy watching the progress their plants make. “They are in the greenhouse every day, so they get to see them transform from seedlings and plugs.” She said one of their biggest rewards comes in the spring when they get to gather up a variety of flowers they’ve grown, arrange them into hanging and mixed baskets and sell them to people in the community. Wright explained that whatever profit there is goes back to the FFA, which pays for the initial cost of seeds and plugs. She said selling the plants they’ve nurtured and grown gives students a feeling of fulfillment and is a good lesson in economics as well.

As successful as work in the greenhouse has been, it hasn’t come without challenges. “Sometimes the south side gets more shade in the afternoons, and it makes it harder for plants to turn. Other times, one side may get more sun,” Wright said.  At one point, Dugan said they had to put a shade cloth over the greenhouse each night to protect the poinsettias from getting too much early light. She said they were removing the cloth one morning when they discovered a snake lounging inside it. Dugan admitted she is terrified of snakes and locked herself in her car. Fortunately, she said, her mother’s Wildlife and Natural Resource class was there and took care of the matter.

One other issue they have had to deal with, Dugan said, concerns times when part of the slab cement floor loses its seal and catches a draft which plays havoc with temperamental plants.  Plants like poinsettias. “Which is why,” Dugan sighed, “they’re a little bit behind.”