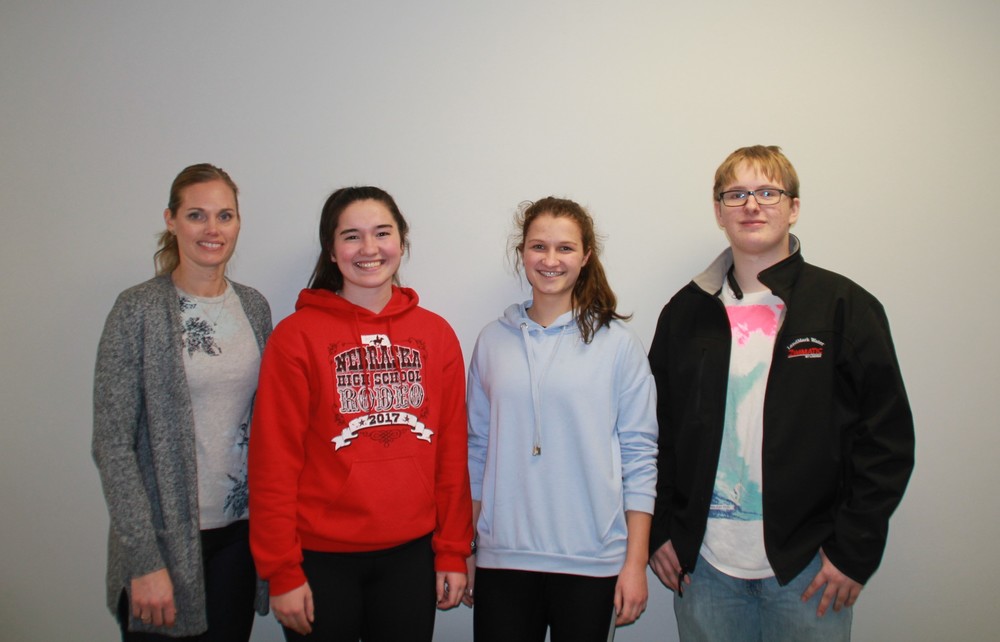 Like most students who are given an extracurricular writing assignment to complete on top of their normal school work, sophomore Jackson Wibbels was less than enthused when his Science class was instructed to write an essay, pair it with a photo, and enter an “Inspired by Science Photo Contest” presented by Bayer and the National 4-H Council. Although fond of science, especially physics, Wibbels admits he put off writing the essay until the last day and was “really relieved” to find the total character count required for the essay was blessedly “short.”

When the deadline entry arrived on November 3 of last year, Wibbels, along with all of the students in Andrea Wolf’s seven Science classes, including Audrey Wood and Johanna Krebber, submitted their contest entries online. A month later, the three were glad they did.

“I got an email saying I received an Honorable Mention,” Wibbels said smiling. “I didn’t think I would win.” Nor, seriously, did Wood or Krebber, especially since the contest was open to every high school student across the country. In the end, besides two Grand Prize winners, there were a total of seven Honorable Mention winners chosen, and the three Central Valley sophomores were among them!

Wood said she was sitting in her first period study hall when she opened the email. “When I read it, I gasped.” Admitting she was stunned, Wood said she looked at a friend sitting across from her and said, “Dude! Read this!”

Johanna Krebber, an exchange student from Germany, was the third among Wolf’s Science students who was notified she’d been awarded an Honorable Mention. Krebber, too, was surprised to read the email. She said the news was definitely one of the most exciting things that had happened to her since coming to school here last August.

Each of the three students said they wrote about some area of science that especially interested them. Wibbels submitted a photo depicting an orrery (a mechanical model of the sun, earth and moon), and wrote how someday he wanted to get his pilot’s license and design his own airplane, “something easier on the ecosystem.” He said he is intrigued with space exploration and hopes to someday become an astronomer.

Wood, who is interested in a career in health care, said her essay focused on how new science technology has made giving blood so much easier.  She said she donated blood for the first time last fall and was surprised at how painless it was. She paired her essay with a photo of a friend giving blood and said as she was doing research for her paper, she was inspired by the enormous good that the simple act of donating blood could do.

Speaking about her students’ success, Wolf said, “I was proud of all of them. The fact this was a national competition and our students did so well says a great deal about our science program here.” She said although a lot of the students were skeptical about their chances of winning, the takeaway from this experience is that if you do the necessary work, “you always have a chance.” Wolf said she was especially pleased with Krebber who immediately grasped onto the fact that science is everywhere.  Krebber’s essay centered on how science plays a role in every part of our everyday lives, “from the food we eat and water we drink to the amount of sleep, diet and exercise we get.” She noted that the lifestyle choices we make and their consequences all have some scientific basis. Wolf said when people understand that science is found in every bore, breath and burrow of life, they become passionate about it.

Besides being recognized for their huge achievement, the three contest winners had another reason for being glad they submitted their entries. Part of their winnings included a $300 Amazon gift card which means, in scientific terms, that sometimes, expending energy on an extracurricular assignment can produce a quantitatively lucrative outcome.