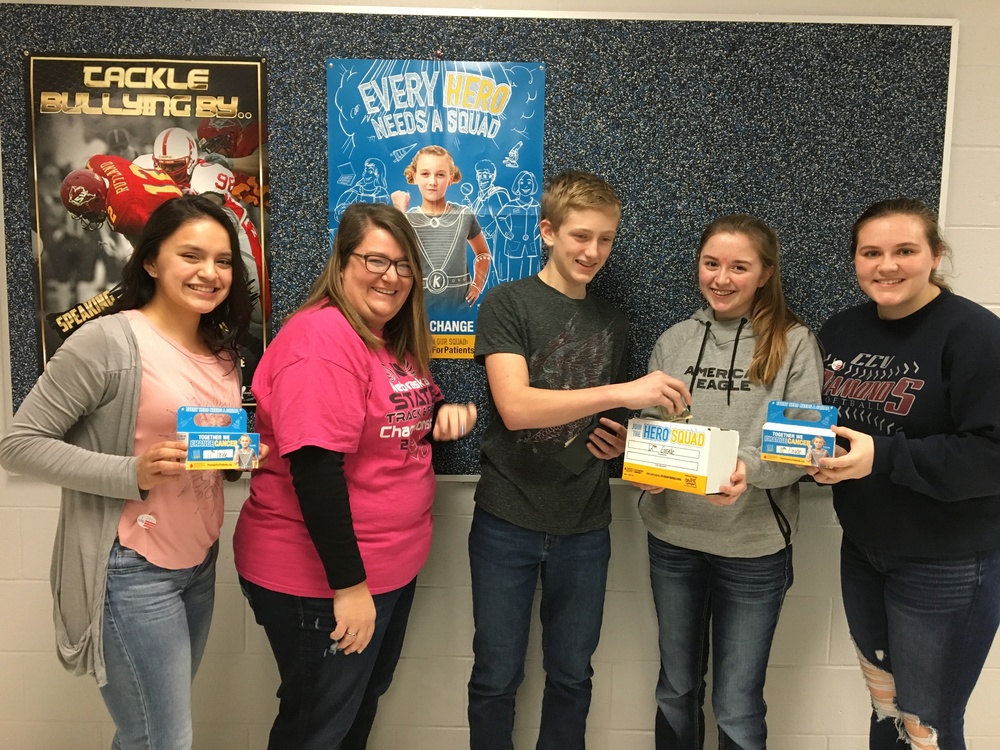 Someone once said that cancer has no prejudice. It attacks every age, race, gender and religion. Rich or poor, it makes no difference. It is totally non-partisan.

The fight against cancer has gone on for decades and, unfortunately, will probably continue for many years more. One of the strongest weapons we can use to subvert it is research. And research takes money.

Beginning Monday, January 21 and for three weeks that follow, members of English teacher Nicki Underwood’s Student Leadership Team will be helping raise money and awareness for the Leukemia and Lymphoma Society (LLS) by encouraging all Central Valley students and their families to take part in its annual Pennies for Patients Campaign. The four students on the Leadership Team include freshmen Carly Johnson, Elaine Abrajan, Kayla Boutin and eighth grader, Xandar Wolf. The money they hope to raise will go toward research and to help people afflicted by diseases such as leukemia, lymphoma, and myeloma; blood cancers that make up more than 10 percent of all cancers diagnosed.

The Leadership Team has been preparing donation boxes provided by LLS for students in the elementary to take home. Underwood said, “Hopefully, families will be encouraged to fill the boxes with their small change.” At the high school, team members plan to have a central location where students can donate any loose change they wish. “There will also be collection boxes in each sponsor’s room with a ‘Penny War’ being waged between classrooms,” Underwood said, adding, “Of course, bills are welcome too.” She said in addition to homes and schools, donation boxes will be set out at gas stations in all four area towns.

“Cancer is impacting us everywhere,” noted team member Abrajan, “but by supporting Pennies for Patients, we are uniting as one to fight cancer.” Johnson added, “I hope that by giving even some small change, we can help make a change—we can help fight this disease and someday eradicate it. I mean, everyone has a few extra cents they can give.”

Wolf said he plans to lead by example during this campaign drive. “I can impact my class and other students by showing them that giving some of our own money to help cancer patients can make a big difference. Everyone can help by giving anything they can, and if many people do this, it will add up to a big amount.”

During last year’s campaign, $494.82 was raised for LLS, money that is very much needed. The fact is, in the U.S. alone, one person is diagnosed with a blood cancer disease every three minutes and one dies from it every nine minutes. In 2018, it is believed that over 58,000 people lost their lives to some form of blood cancer.

Underwood, who has been overseeing the Pennies for Patients campaign with different student leaders for the past several years, has personal reasons to hope for a cure. In the 1970’s, her mom lost an infant sister to leukemia, and Underwood has a cousin, now 29, who was diagnosed with the disease when she was four. “Fortunately, she was able to beat it,” Underwood said.

In addition to doing a huge good for LLS, Underwood said the campaign helps her students take a lead role in its organizing and implementation. She said she is especially proud of these four students whose attitude seems to be the more they can raise awareness for this cause, the more money they can raise.  As team member Boutin said, “Our small contribution to LLS is helping get the word out about it and helping raise money for them. I volunteered for this committee because I wanted to be a part of helping this cause.”

Underwood and her students hope everyone will feel as they do and give generously to LLS. Someday soon, it is hoped we can look at this pernicious disease with knowledge there is a cure for it. Until then, we’ll need to put our faith in God and our money in research.