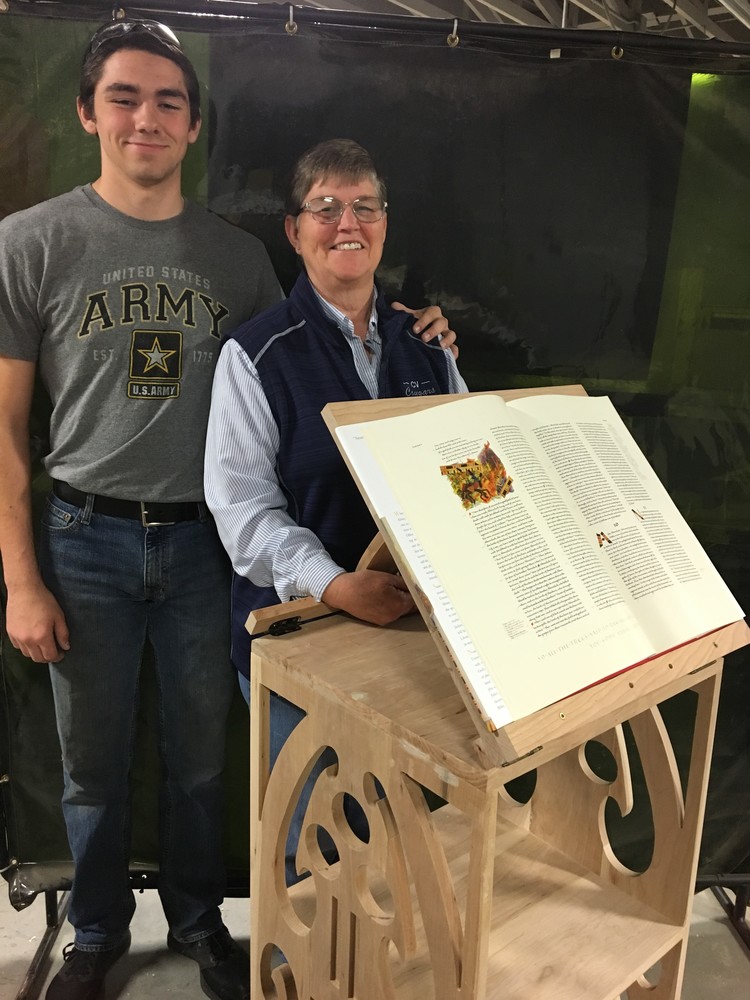 Central Valley’s Gage Bonge had already made one big decision his senior year, to enter the Armed Forces following graduation. But as the school year came drawing to a close, he had another, albeit smaller, issue to decide: what to make for his year-end senior Shop project? The answer came from an unexpected source. His grandmother, Patty Harris, told him someone was looking to have a wooden pedestal made in memory of a friend. The pedestal would need to be of lofty design because it would be used to display one of a seven manuscript set of the St. John’s illuminated Bible that was donated to Greeley’s Sacred Heart Church by Mary Ellen Mulcahy.

Bonge, who admitted he has always had trouble saying no to his grandmother, approached hisShop teacher Lesley Dugan with his grandmother’s design idea and, after making sure the measurements and general design concept would work, he got the go ahead to make it.  “I wanted this to be special because the pedestal I was making wasn’t holding just any book. It was going to be used to hold different series of the illuminated Bible, so I wanted to make sure it was worthy of that,” Bonge said.

Several years ago, Mulcahy presented the Bible manuscripts to Greeley’s Catholic Daughters as a way to honor her parents, Alice and Roger Mulcahy. “My parents loved this community, and it seemed fitting to share these manuscripts with the people here,” she said. The Bible was the work of renowned calligrapher Donald Jackson of St. John’s University in Collegeville, Minnesota, who together with a group of scholars created the first illuminated Bible commissioned by a Benedictine Monastery since the fifteenth century. Mulcahy noted the original Bible manuscripts will be exhibited at the Omaha Joslyn Art Museum this fall.

“There hasn’t really been a means to display our own manuscripts of the Bible here in Greeley,” she explained. Because of this, they were eventually stored away for safekeeping in the Sacred Heart Parish Center. She said when former Sacred Heart School graduate Noelle Hruza became aware of this, she wanted to have a pedestal made in memory of her classmate Anne Callahan Brown. But who was there to make the proffered piece?

“Being entrusted with making the pedestal has been an honor because it will become part of the church’s history and it also symbolizes the special friendship between two friends,” Bonge said. He explained he used the shop’s CNC router which is a machine powered by a computer to cut the pieces out. “The machine ensures a precision cut,” he said. “After I sanded each of the pieces, I glued them together and set the shelves inside. Once I was sure everything fit together and was level, I used screws to secure all the pieces together.”

The pedestal stands about three feet tall and is made of cherrywood, Bonge said. The ornate sides are designed to resemble a stain glass window. “The pedestal has an adjustable lectern that can be raised when it’s holding one of the manuscripts and can collapse flat when it’s not being used.” Bonge said he plans to add wheels once he’s done so the pedestal can be easily moved.

Dugan said she is proud of the attention to detail Bonge is giving his senior project. “I think the most difficult part for Gage has been knowing his work was going in the church,” she said. “That has added some pressure to his project but has also deepened its significance.” She said she is pleased with how much he has improved his carpentry skills. “I think the end product will satisfy everyone,” Dugan said.

Bonge said he’s looking forward to finishing his project, especially since time is becoming of the essence.  “I still need to stain and varnish it,” he noted, adding the last thing he will do is place a small memorial plaque on the pedestal that bears Hruza and Brown’s names. “I still have things to do and time is running out, because I leave for the Army right after graduation,” he said.” So I may need some divine intervention to get this done.”