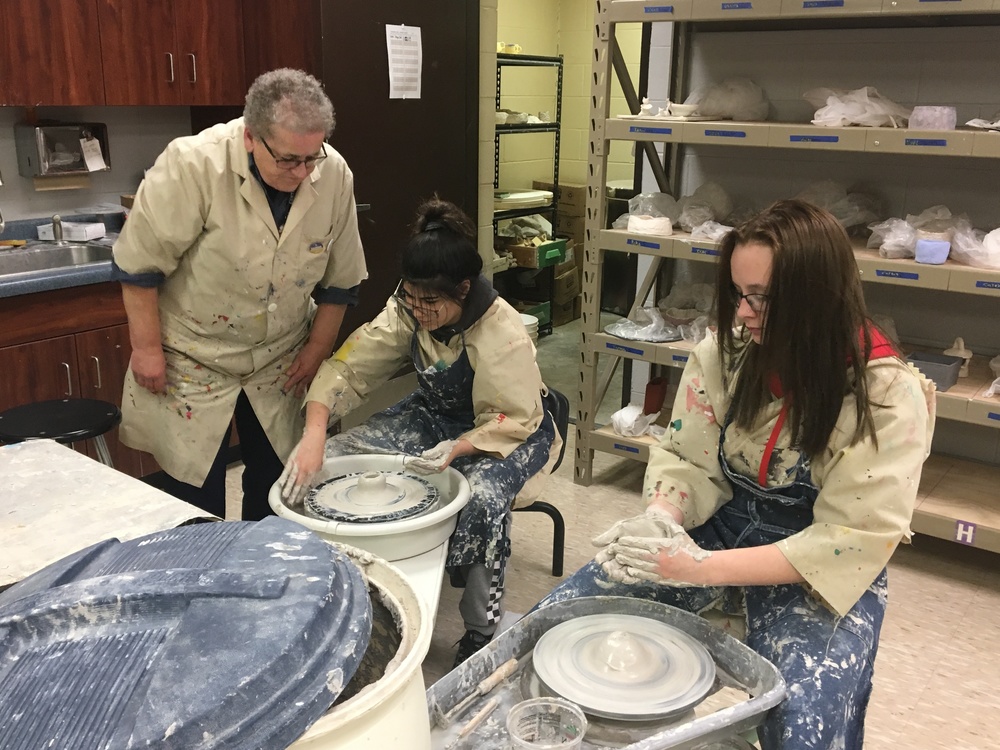 Art teacher Kathy Rakness has taught students for the past 47 years and, like New England Quarterback Tom Brady, has no plans to retire. In 1972, she moved from her home State of North Dakota to North Loup where she still lives. She began her teaching career at North Loup-Scotia High School and now divides her time teaching middle, high, and Special Ed students at Central Valley in Greeley as well as elementary grades 4 through 6 in Scotia. Over the years, she has taught all forms of art, including dark room photography, printmaking, sculpture, Calligraphy, clay, acrylic and watercolor.

Rakness is passionate about her field of study. Ask her where the world would be without art, and her answer is unequivocal. “The only way we know about history is through art. Cavemen were our first architects. They used caves for shelter and told their stories by airbrushing paint through hollow bones.” She said without cave drawings, we would never have known that back in the Stone Age people held religious rites before they went on a hunt. Ergo, she said, much of the Civil War would have gone untold if there hadn’t been artists out in the battlefield.

Rakness’ love for teaching is matched by her affection for her students. She enjoys their energy and optimism and appreciates that her Art classes give them a break from their other studies. "I think kids feel comfortable in Art because they can express rather than stress themselves here,” she said. And while it’s true that some students are more artistically gifted than others, Rakness said, to her, success isn’t just about talent, “it’s about a student’s determination and willingness to follow a process through to completion.”

At this place in the curriculum, Rakness’ students are following the process of pottery making, an ancient art that began back in the Neolithic period over 10,000 years ago. Rakness said she enjoys bringing this timeless form of art into the classroom where her students can create their own history. Before they begin any project, however, she said students first need to learn the basics about it. “Whatever form of art we are doing, we learn the vocabulary that is unique to that art and use it every day. After a while, it becomes second nature.” That means before any of her students take a handful of clay and either slab, sculpt, pinch, coil, cloisonné or get their hands muddy at the potter’s wheel, they must first learn about the clay, or greenware, they use. “It has to have the right consistency for it to form,” Rakness said. This is done by taking a mixture of hard new clay and wet “reclaimed” clay that is stored in a large barrel in her classroom and combining them through a machine called an Extruder until the right consistency is reached. Once done, the students begin building their clay.

Over time, Rakness said, each student will be required to make several pieces of pottery using various methods of construction. However, for these—like most—students, the favorite way to form or throw the clay is on a potter’s wheel. Rakness has two wheels in her classroom; one newly acquired this year while the other, she said fondly, she’s had for 47 years, “and it still runs.”

Once the clay is formed, it becomes greenware, and students get to carve or stamp the piece. Rakness said this is where kids get to personalize their work by adding clay for texture or burnishing the piece. When it’s done to both the student and teacher’s satisfaction, the greenware is set aside to dry for about a week. Once dried, it goes into a kiln that is kept in a small utility space for its first “bisque” fire, a process Rakness described as a slower heat which allows the clay to thoroughly dry and harden. She said the students then choose a color to glaze, or paint, their pottery. The glaze, she explained, is a liquid suspension of glass which gives the pottery color and shine as well as a hard seal. After that, the pottery goes back in the kiln for a second, “faster fire” which sets the glaze into the bisque ware. Rakness said once it’s removed from the kiln, the pottery is done and ready for grading.

Over the years, Rakness said her students have made everything from spaghetti coil pots to garden lamps to gravy boats and five-piece dinner sets. She said she hopes all her students will hold on to some of their pottery and, as their futures unfold, the pieces will become good reminders of a time they spent in her classroom learning and enjoying ways to be creative.

She noted while most of the art projects her students do go without incident, her pottery classes have had a few kerfluffles. “If a student’s clay form is too thick, it can contain air bubbles.” She said that’s a problem because as the piece is firing in the kiln, her room will suddenly reverberate with a loud pop-popping noise. “That means someone’s pottery has exploded, and it usually takes several other pieces out with it.”  On other occasions, she said she’s watched students’ expressions fall after they dropped their formed greenware or finished pottery on the floor, breaking them into pieces. And then there are the times when kids have spilled whole containers of glaze because the caps weren’t put on tight enough. “Once,” she said, “I picked up a container of glaze and went to shake it. The glaze went down my back and ruined my shoes.” She joked the school still hasn’t reimbursed her for those shoes.

Rakness said even though she oversees all the students’ work, it isn’t until later when she can really appreciate the progress they’ve made. Even after 47 years, she said she never tires of seeing her students express themselves through their art. “I am always so thrilled when we get to see the Art Exhibit held each year at the Awards Banquet. I feel like I’m really looking at the students’ work for the first time and thinking, ‘Wow!’”